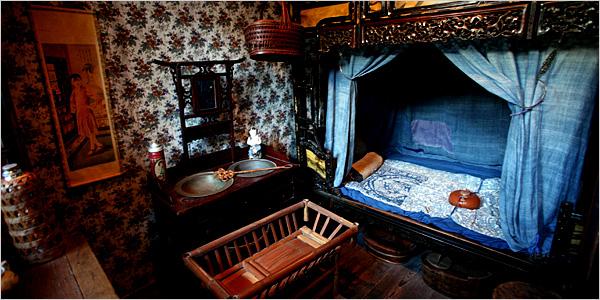 During the Qing Dynasty (1644-1911), a prosperous merchant surnamed Huang built a stately sixteen-bedroom house in China’s southeastern Huizhou region, calling his home Yin Yu Tang. Among the many literary interpretations of this name is the desire for the home to shelter generations of descendants. Yin Yu Tang was home to the Huang family for more than two hundred years until 1982 when the last descendants moved from the village.

The home was oriented in the village according to principles of feng shui to ensure a harmonious relationship with the landscape and was constructed according to local building traditions and customs. Coins were placed under structural columns to bring prosperity to the home’s inhabitants. The first floor bedrooms have intricately carved lattice windows that look out onto two fish pools in the central courtyard. These details tell as much about the aspirations, identity, and creative expression of the Huang family as they do about the architectural heritage of the region.

The family’s well-documented genealogy and the accumulation of furnishings passed down through eight generations offer the opportunity to understand historical changes in China as they affect individuals in their daily lives and cultures on a global scale. With the museum’s already extensive collections of Asian art and period architecture, the acquisition of Yin Yu Tang provides unrivaled opportunities to explore the artistic and cultural heritage of rural China and the multi-faceted, often surprising, connections between Asia and America.

MELROSE, Mass.— IN the village of Huang Chun, in the south-central province of Anhui, a wealthy Chinese pawnbroker named Huang commissioned an elaborate house of wood and stone more than a century ago. He called it Yin Yu Tang, or Hall of Plentiful Shelter. The house had 5 bays, 16 rooms and 2 fishponds. Complicated feng shui calculations dictated that the house face north, instead of south, where it would have received the most sunlight.

To ensure that the pawnbroker’s descendants would have ample food and wealth, carpenters placed chopsticks where the many columns met the roofbeams, and they buried coins where the columns met their carved stone bases.

Yet, despite these precautions, some family members encountered bad luck: legend has it that one son squandered his inheritance on operas staged for village celebrations. Another heir was robbed and murdered by pirates, his corpse thrown in the Xin’an River. The family fortune ebbed. Rooms had to be sold off to distant relatives.

By the mid-1980’s, Yin Yu Tang sat vacant. Four years ago, the pawnbroker’s descendants gathered to vote on selling it — at which point it would most likely have been torn down, its ornate wood traceries and cedar beams sold for salvage, its ancestral documents and furnishings scattered among relatives or auctioned off. {article by By TRACIE ROZHON}