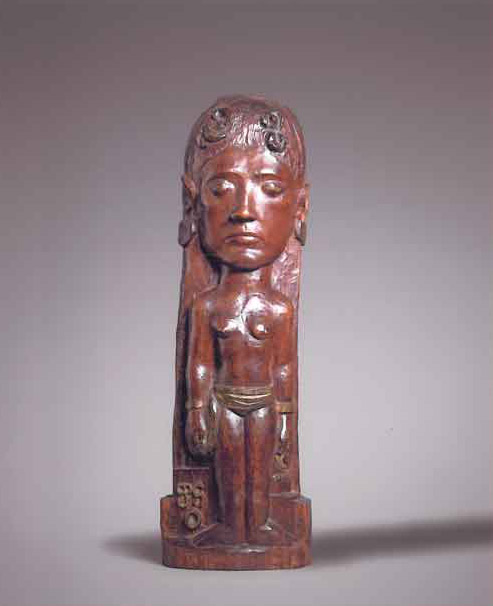 The ambitious Paul Gauguin retrospective, which opens at the Fondation Beyeler on Sunday (until 28 June), will include an exciting rediscovery. Thérèse, 1902, a carved figure of a stylised Polynesian woman, disappeared around 1980, and has since been hidden away in a private London collection.

Sam Keller, the Beyeler’s director, spotted the work at Frieze Masters last October, on the stand of the London gallery Lefevre Fine Art, which is lending the sculpture for the show. The haunting figure of the woman is said to depict a servant of the Marquesan Catholic bishop, Joseph Martin, who Gauguin believed had sexual relations with his employees. Sadly, the pendant sculpture of the bishop, Père Paillard (Father Lechery), 1902, now at the National Gallery of Art, Washington, DC, is not being borrowed, so the bishop and the servant will not be reunited.

Gauguin’s sculptures are often overlooked. But his ceramics and carved wood sculptures are highly inventive, revealing a different side to his work. They had a powerful influence on such 20th-century artists as Pablo Picasso. Raphaël Bouvier, the Beyeler show’s co-curator, says: “It was Gauguin’s sculptures, their expressive power and their archaic air, that left their mark on Picasso’s first essays in the medium.”

The Beyeler exhibition is being billed as the greatest show of Gauguin’s work since “Gauguin: Tahiti” was held at the Grand Palais in Paris and the Museum of Fine Arts in Boston (MFA) in 2003-04. After six years of work, the Basel museum has secured the loan of 50 paintings and sculptures from 13 countries. Although the show is covering the artist’s full career, it will concentrate on his period in Tahiti and the Marquesas Islands, from 1891 until his death in 1903. It was there that he did his greatest work.