Skip to content
We are aware of our shadows. We sense them, see them and at times feel them. Shadows are universal. In some cultures the shadows are treated as spirits or ghosts and often feared. Chhaya is the Hindu goddess of shadows. Chhaya was born from the shadow of Sanjna and replaced Sanjna in her house. In the Early Egyptian culture, the shadow Khailbut was one of seven souls, a person possessed. In the Early Roman culture, the shadow was referred to as Umbra and on death it was believed that his Umbra or ghost went to a place in the Underworld. In the Early Greek culture, people gave their shadows as sacrifice to the Gods. From a Psychological viewpoint (Jungian Psychology) the shadow is used not as a physical shadow but as a part of the unconscious mind, expressed often as an evil component. This shadow often makes its presence in dreams. Some individuals using drugs and sleep deprivation, often report hallucinations of “shadow people”. In paranormal or supernatural beliefs the shadow takes on the persona of a human like spirit. Shadows can take on a mythical form, as In the legend about a Native Canadian Boy where his sister gave him a Shadow which he must keep with him as his guardian spirit. In the Fairy Tale of Peter Pan, Peter loses his Shadow and makes great efforts to retrieve it. (Joseph D. Sage, 2018 MetaForms and MetaNudes etcetera, e-Book IV)
One should not be surprised at early man or woman thinking that the shadow is a part of them, or a spirit. They may have wished to capture it and produced some of the early cave drawings. Today we capture our shadows using photography, as in Figure B-1. Even today when we don’t understand something or what is happening in our mind we often assign a spiritual entity, a god or goddess to those feelings. A scientific explanation often helps to clear up that perception. When one looks even deeper, particularly on a quantum level, the spiritual arises again. It is very common to assign surrogates to things we do not understand. We are also continually redefining those surrogates. 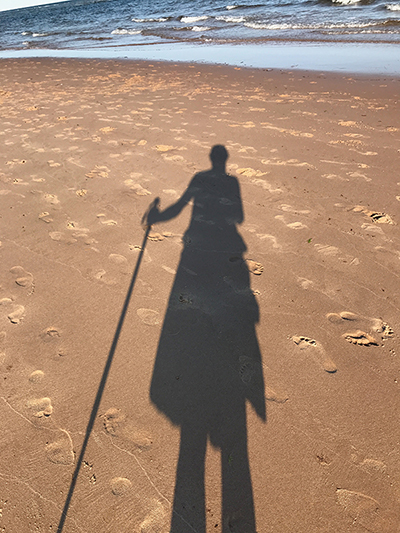 Figure B-1. Shadow on Sandy Beach. JDS.
The term shadow can have various meanings and uses. Some people live in the shadows. A shadow can be a person following you secretly. In the 40’s there was a radio program by the name of  “The Shadow” in which a person who was invisible would say in a ghost like voice, “the shadow knows”. As children we were fascinated. Shadows are used to tell time. A shadow may be used to imply the presence of a body. A shadow has no shadow. Neutrino flows do not produce shadows. Shadows produce a perception of space. it expresses or gives the impression of depth as well. Just today it was reported in the New Times that the artist Siah Armajani had made a calculation for the dimensions of a tower such that its shadow would cover the state of North Dakota ( NY Times, 22 March 2019, C13, Holland Cotter). The local Native population might put up a resistance.

I once danced with my shadow. It occurred in Haiti at a party given for us by the Haitian sculptor, Murat Brierre. It was held at night on a flat rooftop of a tavern outside of Port au Prince. One had to climb a wooden step ladder to get to the roof. Nothing was initially on the roof, then chairs arrived, a table, a phonograph and lastly food and drinks. People would climb the ladder, stop by and pay tribute to Murat and then leave. It was a full moon, Haitian music was provided by the record player. A white masonry wall was on one side of the roof. I engaged one of the local ladies to dance and noticed our shadow projected on the masonry wall by the moonlight. We danced not only together but also with our shadows. At that time the shadows were part of the dance and a part of us. No drugs were involved and it was not a Vodou event, although it caused a trance like feeling. The experience generated the art piece shown in B-2. Art only captures part of an experience. That evening I may have danced with the daughter of the vodou goddess, Erzulie Freda. 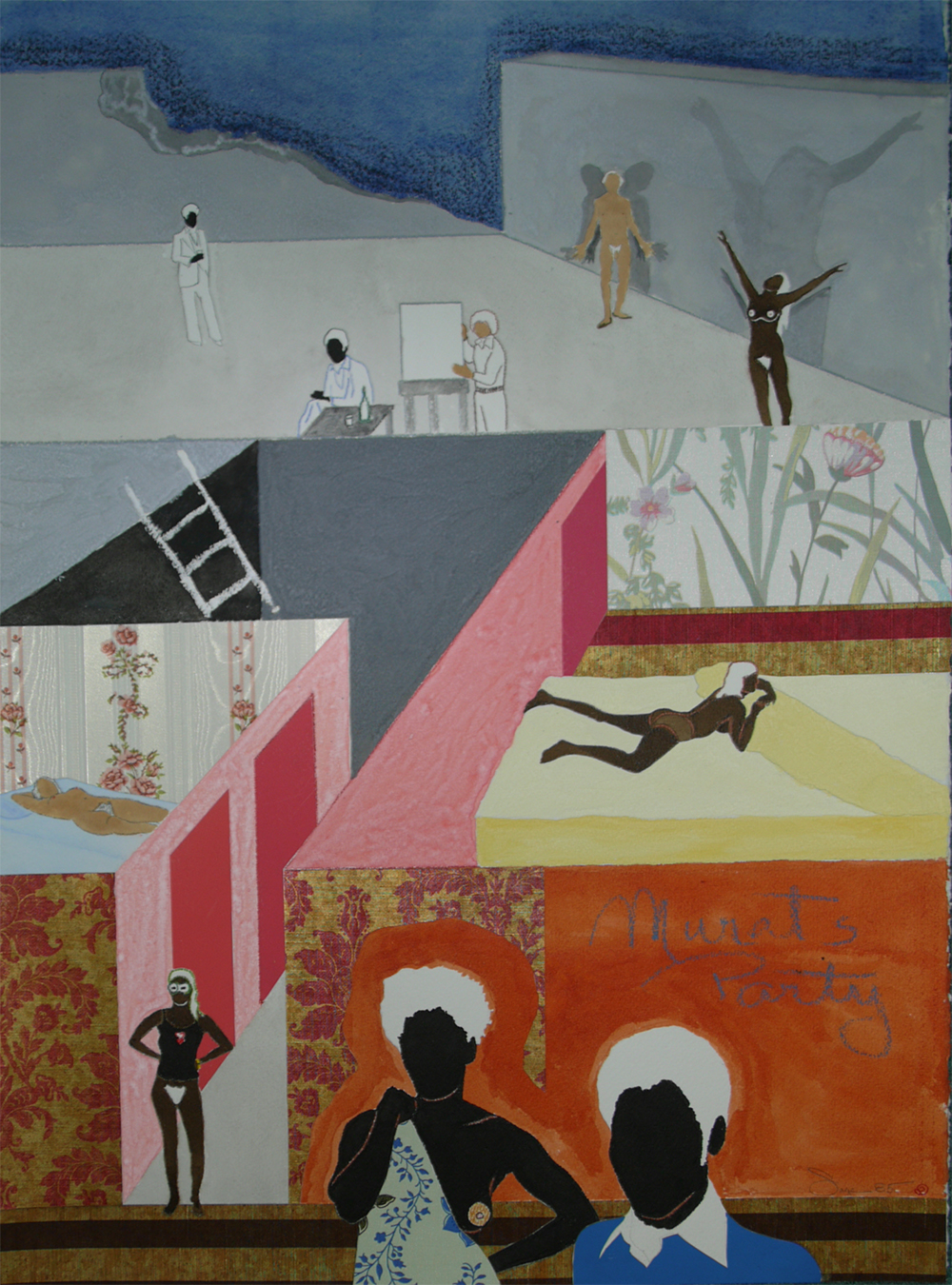 Erzulie Freda is probably the most popular of all the Loas ( Lwas ) in Haitian Vodou, who among other traits represents the moon. She loves to dance and is the most graceful of all the loa ( lwa ). She is quite special to men and will dance with them, kiss and caress them, even in an often embarrassing manner. She represents the epitome of femininity and compassion. She is also the patron Lwa of iron and technology. Her symbols are a heart, a mirror, and a fan. Figure B-3 is a traditional symbol for her. (https://en.wikipedia.org/wiki/Erzulie) 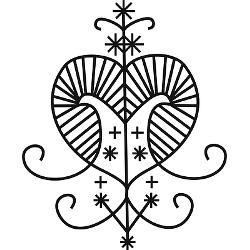 Murat Brierre (1938–1988) was one of Haiti’s principal metal sculptors. He sculpted works that reflected both Christian and Haitian Vodou themes. He is recognized to be one of the best Haitian sculptors. He probably knew Erzulie Freda. His works have been exhibited in many countries, in such places as the Abbaye de Daoulas, the Grand Palais, the Brooklyn Museum, the Modern Art Museum of Mexico and the Musée du Montparnasse. His work is part of the permanent collections at the Waterloo Museum, the Davenport Museum, the Milwaukee Art Museum, Le Centre d’Art, the Musée d’art Haïtien du Collège Saint-Pierre and the Musée de Panthéon National Haïtien. (https://www.lecentredart.org/portail-de-lart-haitien/the-artists/brierre-murat/?lang=en) Figure B-4 shows a sample of his metal art works.

On a visit to Haiti in 1979, My wife and I visited Murat at his home on the outskirts of Port au Prince. I asked to see his studio. his studio was his open back yard. He used only a ruled straight edge, a piece of string with a pencil or chalk on the end, a sharp metal chisel and a piece of railroad rail as an anvil. Talk about minimal sculptural tools to make large metal creations. He passed away in 1988 at the age of 50. 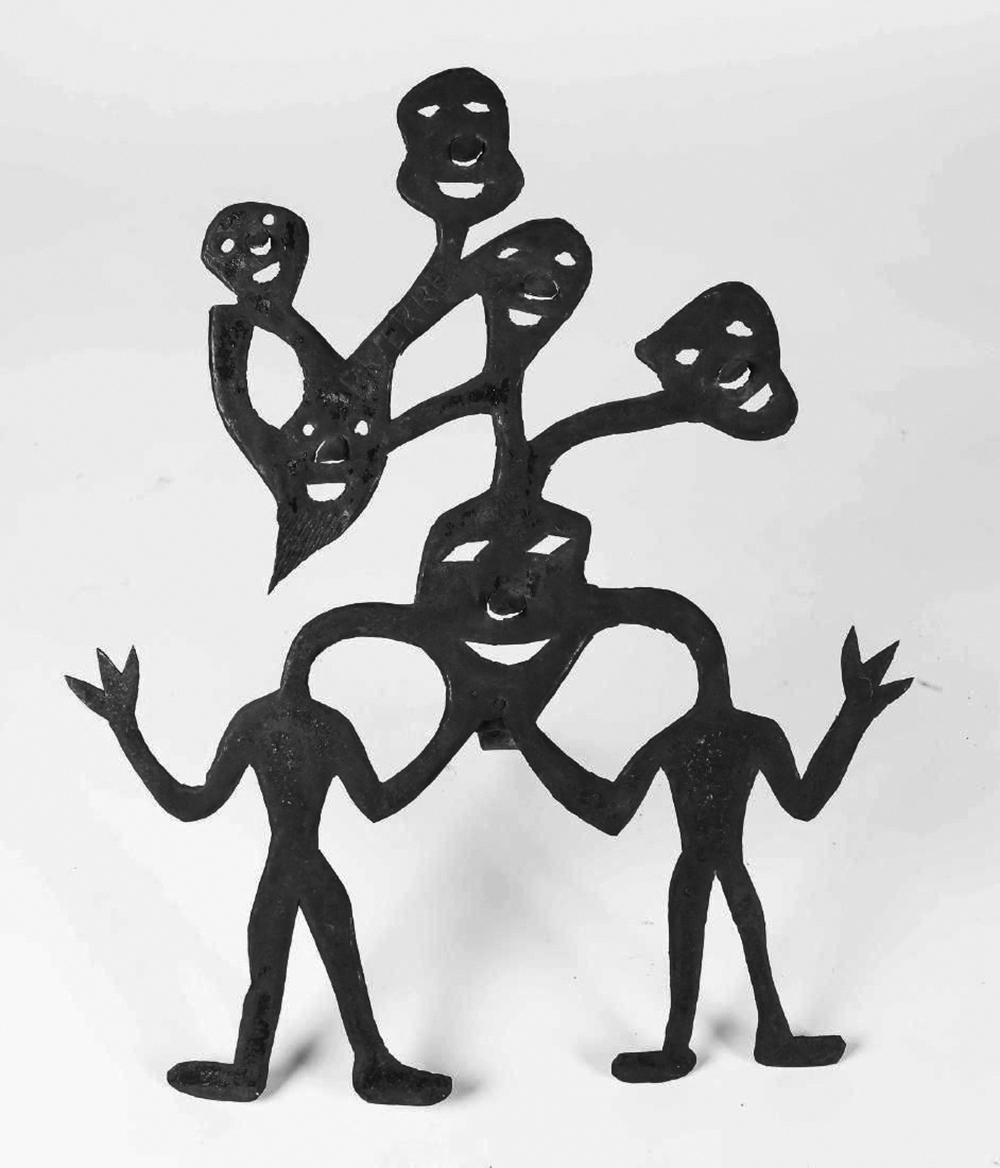